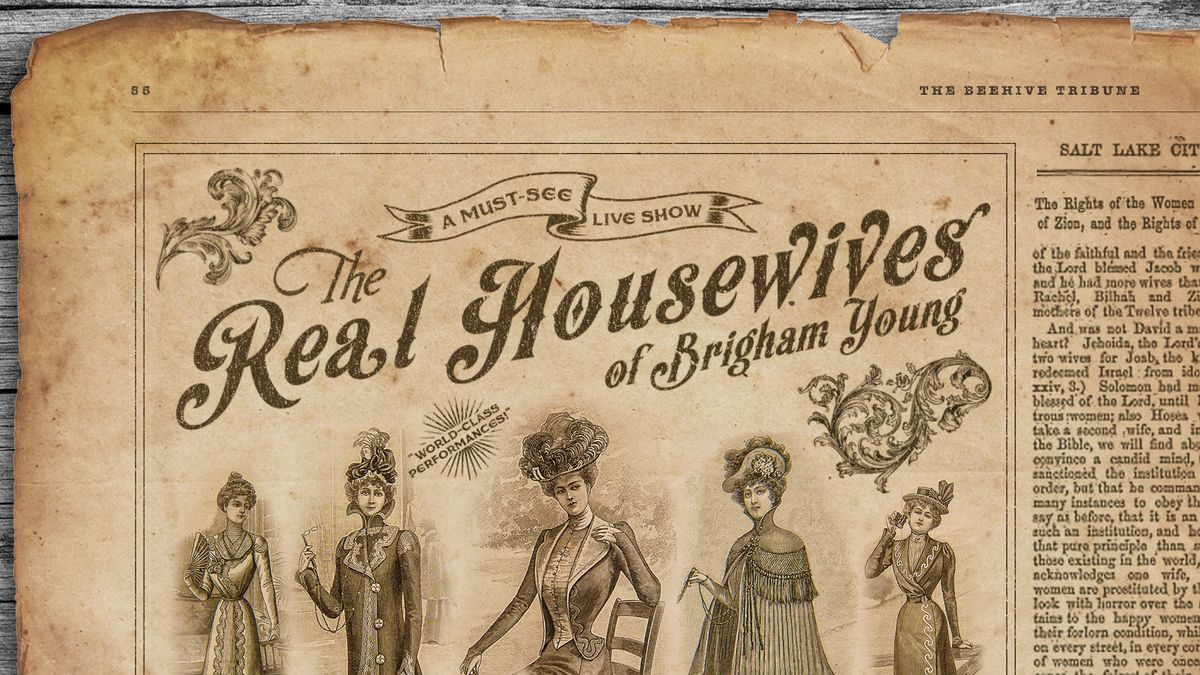 I was 15 when Julie Stoffer showed up on The Real World. My family’s access to MTV was only about a year old at this time; my parents had resisted paying for cable despite their children’s pleas for the better part of a decade.

The Real World was first class television. A handful of young adults experiencing real issues in a real place from inside an outrageous mansion and with access to basically unlimited resources. They had jobs. They had conflict. We teens were enamored with the responsibility of it all.

The hot young people hardly older than us were a televised testament that we too could be trusted to navigate complicated adulthood.

The show’s format and early seasons were wild enough for Utah Mormon teenagers, what with the drinking and scandalous co-ed living. The unadulterated hedonism intrigued us while also allowing us to dip our toes into disrepute without ourselves becoming disreputable. The Real World was disconnected from our real world. Filmed off in some distant land involving distant people with distant lives we could hardly understand. It was exciting in the way a lot of fiction is exciting. Aspirational, even if impossible.

Then Julie showed up.

Her entire personality and bio was “BYU student; Mormon.”

That’s why they cast her. No other reason. MTV knew it would be fascinating for a segment of the population to see some barely modern Doris Day from Utah in 2000 live with a bunch of gentiles in New Orleans.

AND THEY WERE RIGHT.

It’s hard to explain how scintillating it was to discover a fellow Utah saint on MTV at that time. There had been a small slew of Mormon and Utah celebrities over the years—usually of the Osmond variety—but we hadn’t seen our own exposure ever cross the gritty waves of a network banned in many of our houses.

And it wasn’t even like this Julie person was a former Mormon. We’d seen those. They were exciting, too. We claimed them even while they disavowed us. But there was a limit to how connected we could actually feel to someone who tried to hide the connection themselves.

Julie was an active Mormon, proudly proclaiming her Utah-ness and waving the Cougar banner. She was a current student of the Lord’s University. BYU wasn’t her alma mater. It was her Alma. I don’t know whether that joke makes sense. I haven’t been to church since Mitt Romney was a presidential candidate. The point I’m trying to make is Julie was in it with plans to stay in it.

My peers and I devoured Julie’s season of episodes, salivating over every reference to our faith and state.

“Did you hear them talk about BYU in the last episode?” I remember my friend Tim asking. “They talked about her going to BYU.”

This was wild to us in a just post 90s Utah. Apparently deciding that “no press is bad press,” The Real World episode where Julie’s family visited the bayou estate and judged her fellow castmates over their partying habits and sexual orientation was like having fry sauce pumped into our veins. “Our parents would disown us,” I remember one of Julie’s brothers telling the gay roommate after wondering aloud what would happen if one of his siblings was gay.

One episode featured Julie talking with the BYU Honor Code office about whether her broadcasted turpitude merited expulsion. “She’s just doing missionary work! Even Jesus hung out with the prostitutes and marijuana addicts!” my friend Nick argued, remembering the Bible differently than I did. Nonetheless, I nodded in agreement.

The season ended, but the drama did not. Rumors and articles about Julie’s ongoing consternations with Brigham Young University drummed up dialogue in our community. There were continued discussions about whether she did our faith a favor as she was suspended from her school for living with men on television.

[FYI, I just read on Julie’s Wikipedia page that she was “scheduled to fly on American Airlines Flight 11 from Boston to Los Angeles on September 11, 2001, which would later crash into the North Tower of the World Trade Center, but missed the flight due to an argument with her boyfriend.” This article is not about that, but maybe it should be?]

Julie’s name had barely left our lips when suddenly, in 2002, Neleh Dennis showed up on Survivor. The Real World had been a pioneer in reality television, but Survivor made it mainstream. Premiering at the turn of the century on CBS, we were all sucked in. Here was a social strategy game in which contestants were required to compete in challenges, forage for food, create alliances, and “out-survive” other players. It was a relatively G-rated version of The Real World, but with actual purpose and stakes and network television reach.

Local news covered Neleh’s assent to the top of a game that required a person to be likeable to succeed. She was cute. She was folksy. She was ours.

Every time Neleh uttered “oh my heck” it felt like our names were being individually read aloud on primetime television.

My neighbors were less horrified by Neleh’s coed living than they had been with Julie’s. Maybe Julie had paved the way for Neleh, or maybe it’s not really living in sin if there’s no roof. Whatever the reason, Neleh was treated differently. She wasn’t a controversy; she was a revered ambassador.

It was reported that Neleh had selected a copy of The Book of Mormon as her one personal item to bring with her to the island. One of my Sunday school teachers cut out the Deseret News article reporting this and read it to us, citing it as an example of missionary work coming in all shapes and sizes. “Neleh could have brought Teen Vogue,” Sister Swenson said. “But she didn’t. She brought scriptures. Maybe that’s why the Lord is helping her do so well on Survivor.” We amen’ed that. We amen’ed the hell out of that.

Neleh truly was successful, outlasting nearly all the other contestants that season until she made it to the final two and pleaded her case in front of a jury of the losers.

She was pitted against Vecepia. My entire extended family gathered at my Aunt Tami’s house to watch Jeff Probst’s live reading of the last votes. “Please win,” I whispered to myself throughout the entirety of the broadcast. “Please, please win.”

We screamed in excitement whenever Jeff revealed a card with Neleh’s name on it. We booed Vecepia. We didn’t have any particular issue with the latter. But her success felt like a challenge to our very way of life; she was our enemy.

Neleh took second place that season. She lost by a vote or two. I cried when it happened. I had recently come off of two Jazz finals losses to the Chicago Bulls. My heart could barely handle another Deseret defeat.

After Julie and Neleh, Utah’s dabbling in reality television became more and more common, to the point that we eventually stopped noticing it as much. Producers pushed the this-might-be-a-sister-wife angle less in introducing characters, aware that the novelty had worn off enough that the general public wouldn’t be intrigued to tune in just because a Utah Mormon was being paraded through a contest like an exotic zoo animal.

I joke now about how wrapped up in it we all were in those early days. It’s funny we cared so much—as if my life or anyone’s perception of Utah could ever change in any meaningful way just because David Archuleta nailed “Bridge Over Troubled Water” in the season finale of American Idol (another second-place reality show finisher from The Beehive State).

Of course it doesn’t really matter. It didn’t then, and it doesn’t now. I know that. I probably kind of knew it then, too.

Even still, when a new set of characters is introduced in the first episode of my favorite reality television shows and I find out that one of them lives just a few miles from my house, I can’t help but think from somewhere not that deep down, “Please don’t be crazy. Please don’t be racist. Please don’t say ‘oh my heck.’”