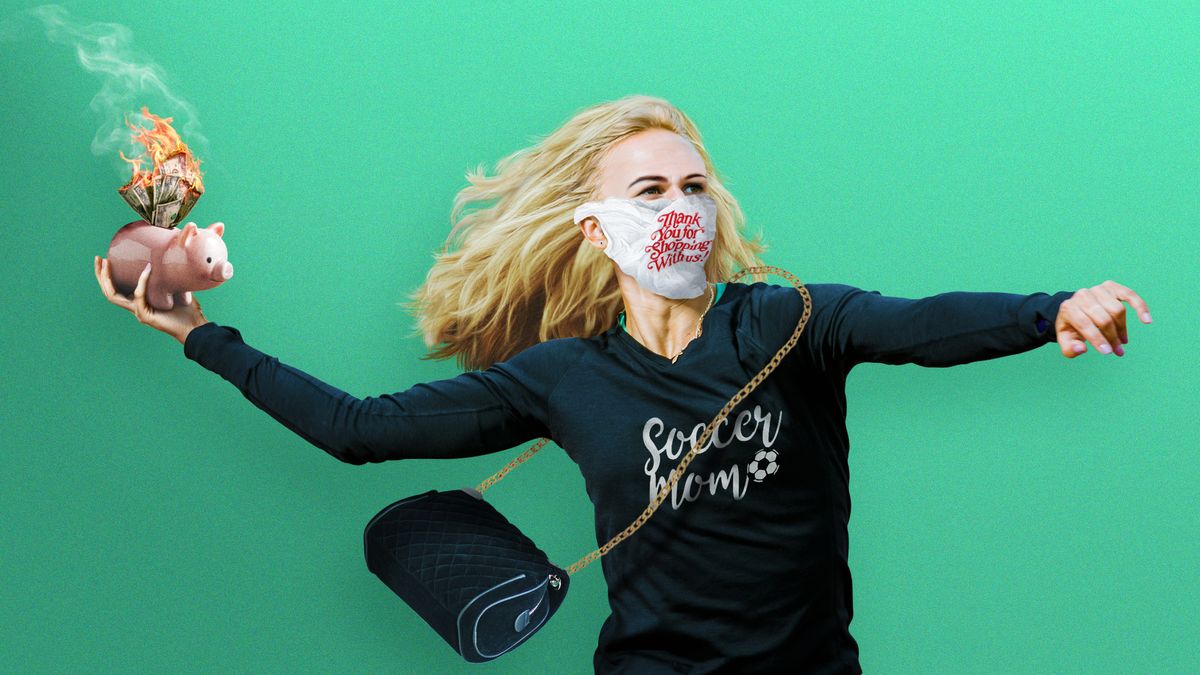 Things were fine. Birds nested in trees and the sun glistened off of The Great Salt Lake. The valley was peaceful. Almost too peaceful. And then one day a sign was hung.

My husband and I were in the self-checkout line, probably stealing a little since we don’t always know the name for the produce we’ve selected, when we saw it.

“What? What are we going to do? I don’t even know where my debit card is.”

We’re VISA credit card people. And over the coming days we discovered basically everyone else in the state of Utah is, too.

“Did you hear about the Smith’s VISA thing?” I heard a coworker a day or two later say to another coworker in a tone reserved for weary countrymen preparing for war. “We don’t know what we’re going to do yet.”

Local news extensively reported the ongoing crisis. The parent company of Smith’s, Kroger, was responsible for the standoff. It had decided VISA imposed too high of fees on retailers and so the company fired the first shot by banning VISA’s supposedly exploitative practices. Lines were drawn. Battle hymns were sung in Mormon congregations the very next Sunday.

But like all wars, while the faceless decision-makers strategized behind closed doors and over large table maps, the true burdens fell on the citizenry. Worried parents checked the news for updates on the fighting. Smith’s created anti-VISA propaganda to rally support for its efforts. It was harder to get bread.

People in Utah handled the change in different ways. “Looks like we’re done with Smith’s,” my husband informed me, like he was considering planning a protest at Kent State. Others were less deliberate in their lifestyle change, going to a different store only after pulling into the Smith’s parking lot and being reminded by large signs that war was still raging.

When I told the room of rat-faced team members at The Beehive I would be reporting on this, fellow writer Rebbie Brassfield gasped and informed me that she had recently been caught in the crossfire of a Smith’s checkout with only a VISA credit card. When the bagger informed her of the battle she had so ignorantly ignored, she offered to pay for Rebbie’s groceries, and had Rebbie reimburse her through Venmo. It might be the only time a business has ever simultaneously earned both zero and five stars for the exact same transaction.

I was perhaps less principled than my twenty-something-year-old husband who still sometimes has hope in his eyes because the world hasn’t yet crushed his dreams. Only two days after we chose sides in the Smith’s-VISA war, I dug out an old debit card, blew off the dust, and wandered back to my local Smith’s for some oatmeal.

My options were just too limited, I thought. It was too inconvenient to start going somewhere else. Smith’s is close to my house and it’s an almost aggressively average grocery store. It’s not great. It’s not bad. It’s just average. Truly, perfectly fine.

If I don’t go to Smith’s, I either have to go to Harmon’s, in which case I can’t save for retirement, or I have to go to Fresh Market, a store which has a name I can only describe as “sarcastic.”

No offense, Fresh Market. The people who work there are lovely, and always make me feel like Jesus on his triumphal entry into Jerusalem as I walk through the aisles full of expired food. It’s just that one time I was buying fish from the 16-year-old butcher at the back of the store when he said “I hope this doesn’t make you sick. I was literally just about to throw it out because it smells funny.” So, yeah. Smith’s has just been a historically better option for my family.

There’s also a REAMS a couple of miles away; I’ve already reported extensively on that establishment so I’ll spare you a recap here.

I suppose Smith’s is the great class equalizer. A neutral ground for the poor and wealthy to gather and purchase apples. Smith’s isn’t dirty, nor is it the Winter Palace. Smith’s is just fine. It’s just fine for everyone.

You’ll never hear someone say “I love Smith’s!” in the same tone people use to describe their relationship with In-N-Out or Nordstrom. “Let’s just go to Smith’s” is the precise verbiage always used to propose an errand to the store. Always with the word “just” right after “let’s.” Always in a tone of fatigued settlement.

But with the VISA ban looming over us, suddenly the public had to decide whether they were going to become Harmon’s people or something less. It can be overstated how detrimental this was for our community, and I’ve just done it.

The point is, I never realized how perfectly fine Smith’s was until it became so difficult to go there.

I got the sense from friends and acquaintances that my community at large was coming to the same conclusion. No one had really realized how much Smith’s was a part of all of our lives, and how little we appreciated it, until war ravaged our cities and towns.

For the first few months embattled citizens spoke in “whens” and “untils” as though a treaty would be negotiated at any moment. “When the two can work this out I’ll start going back to Smith’s,” they’d say. “Until then, I guess Dan’s?”

Before long, hope began to leave their faces. War became the new norm. No one seemed to even be contemplating the possibility of a ceasefire or surrender.

But then, as quietly as it began, the war ended. I noticed it while getting gas two weeks ago at a Smith’s gas station. “Smith’s is now accepting VISA credit cards again,” a small sign underwhelmingly informed me, as though I hadn’t gone through several existential crises and experienced strain in my marriage because of the corporate consternations.

Not even an apology? I thought, as I chucked my stupid debit card into the glove box of my car to sit abandoned with 40 loose sheets of expired insurance policies.

That afternoon I saw an article in the Deseret News. “Smith’s grocery store brings back VISA credit cards for literally no reason.” That’s not a quote from the body of the article. That’s the article’s title. If you thought I was exaggerating when I told you people acted like our nation was involved in a pointless war, I would refer you to the subtext in the words “for literally no reason” from an article in one of Utah’s prominent respectable newspapers.

I saw my family the day after the announcement. “Did you hear about the Smith’s—” I started to ask them before all three of my sisters at once began shouting in joy about the news they had already deliciously consumed.

The celebrations in conversations with my friends and coworkers over the next few days sounded like the relieved declarations of people who were just happy our boys could finally come home. Except instead of boys coming home it was grown adults not having to remember their pin numbers anymore.

It was over. And like many wars, no one really knows what to make of it. Was anything gained? Was it worth the sacrifice? Will there be peace for long?

On Saturday I drove down the street to my neighborhood Smith’s. I dodged the shopping carts sloppily strewn about the parking lot. Inside I gathered some perfectly average produce, navigated the self-checkout machine that only registered about half of my touches, and probably stole a little in the process.

I drove home and unloaded my moderately-priced groceries, thinking about a time, not that long ago, when the sky seemed grayer, the people more tired.

In peaceful contemplation, I put the last item away, walked into the living room, and hung a Smith’s grocery sack in the front window.