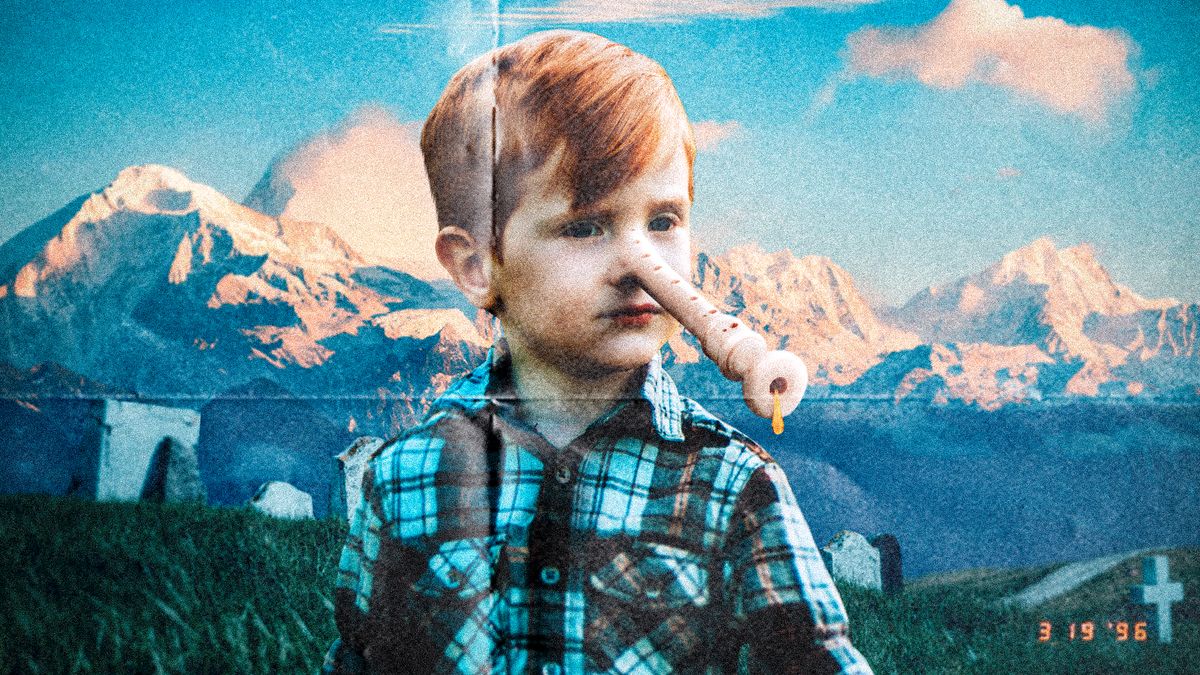 We're Coming To The Beehive State. Come On!

I sat on the grass near Brigham Young’s grave as a bologna sandwich that had been prepared by a handful of PTA moms was passed to me. I was ten. My fourth grade class had been looking forward to the big Utah history field trip for at least six months.

Whether the outing would actually happen was always in limbo—or at least, that’s what we were told. It hinged on our scholastic behavior, which had most recently been called into question during The Samantha Brown Vomit Incident only one week earlier.

It happened during music time. The entire fourth grade had been gathered into one classroom where all the desks and chairs had been pushed to the sides to make space for 180 ten-year-olds to squish together on the floor and practice a song about the Mormon pioneers for our upcoming Utah history assembly.

Everyone had been assigned specific roles for the 90-minute musical jamboree, and these roles were entirely talent-based. The cuter children who showed above-average promise were given parts as narrators. My best friend Sam had wowed the educator-judges with his Slap Leather line dancing agility; I seethed with envy when he was selected to join four of the popular kids for the much anticipated half-time dance routine. Twenty others were invited into what to us was an elite choir that would perform a handful of classic pioneer-themed numbers. The rest of us were relegated to the band of recorders for a rousing rendition of the State Hymn, “Utah, We Love Thee.”

“The recorders are the most important part of the whole thing,” Mrs. Goodrow assured us in a way none of the other kids seemed to require assurance. “I’m sure the Slap Leather dancers would just die to take your place,” she said to the 109 of us who might as well have been named by numbers.

I wanted one of the bigger parts for the attention, of course, but more importantly, I hoped to avoid being sentenced to the recorder band of feckless idiots because I knew I was going to stand out, and not in the good way, if I had to join them.

The class had been required to purchase recorders at the beginning of the year. Some local company, whose founder is probably now a billionaire and living in a gaudy Utah County mansion with two paintings of Jesus giving to the poor in each of the forty or so rooms, had gone about manufacturing the instruments and then selling them for six dollars a pop to every fourth grader along the Wasatch Front. They were shiny and black and identical.

“Can we please just get one of the black ones,” I begged my mother as she fished a puke yellow recorder from a bin in a closet mostly packed with sewing supplies and boxes of fire-baked clay handprints she had received every Mother’s Day for the last 16 years.

Mom had bought this recorder in college in the early 70s for some course that was a part of her music major. I knew how this battle was going to go before we even started because I had seen my two older sisters each fight the same war when their own recorder careers came up to bat.

“Why would we buy something we already have?” mom stared into me the way only mothers in the 90s could.

“Then it will match your attitude.”

She won the argument, but she had some experience under her belt and was competing against a powerless ten-year-old, so I’m not sure we ought to bestow on  her all that much credit.

In any event, I set off the next day on a defeated walk to school, a yellow phallic instrument sticking a few inches out of my navy blue Jansport backpack. The show was shaping up to be a personal disaster for me. No big part. No opportunity at stardom. And along the way I’d be scoffed and mocked by my unforgiving classmates unless I could somehow get my hands on a standard black recorder.

I felt hopeless, and certain my fourth-grade woes were as unparalleled as the injustices I was facing. But then one day, just a few weeks before our quite-off-Broadway debut, the teachers announced one bonus opportunity for top-billed participation.

For the final two songs, the entire fourth grade would gather—the narrators, the dancers, the residue—to partake in a one-two punch of Utah nationalism. The hodge-podge musical would end with a vibrant rendition of Neil Diamond’s “Coming To America” except we’d change the words to “We’re coming to the Beehive State, come on!”

But just before that final number, we’d sing a melancholic song about the keepsakes the poor Mormon pioneers had carefully coddled across the plains. They planned to use the rarely-engaged blue spotlight for this one to give the audience a sense of somber memory. The song itself was a true showstopper, but Mrs. Rushton, one of the other fourth-grade teachers, had pitched a performance idea for it that we all knew would make it an even bigger hit.

You see, periodically throughout this sober and thoughtful number, we’d sing a list of objects the pioneers might have cherished. The list included things like “locket,” and “journal” and “Book of Mormon.” Mrs. Rushton thought it might be more impactful if instead of the entire class singing those words together, one student at a time stood and sang their assigned object while holding an example of it high above their head.

Mrs. Rushton had gathered replicas of these pioneer-era relics, mostly from the closest D.I., and she said she’d watch our practices and decide who would be selected to participate in a one-word solo. As a bonus, the chosen students could keep the assigned objects, which was exciting as it pertained to things like “compass” and “bonnet” but a little more curious relative to all of the religious literature.

A chance at a part and a physical prize? I needed this like a polygamist needs wives.

Upon hearing about this one last chance to claim a unique role in our production, I decided this would be my opportunity—this would be my avenue to shine. Sure, I’d get teased for my yellow recorder during the band’s miniscule offering. Sure I’d otherwise mostly disappear into the musical masses backstage for the majority of the show. Sure, Sam would get his chance in the spotlight through his physical artform at the midpoint of our love letter to this our Deseret. But I’d get the last word (hopefully “knife” or “bayonet”).

And so I sat up straight on the floor near the center front of the room on the morning of The Samantha Brown Vomit Incident. This would be the day Mrs. Rushton would identify the handful of students who would best represent Jordan Ridge Elementary School. I had worn my most handsome t-shirt, which had the word “NOT!” scrawled across the front. I planned to follow instructions, listen, belt — do whatever I needed to do to show Mrs. Rushton I could carry with me the appropriate gravitas for the occasion.

We weren’t thirty seconds into our warmup when Samantha Brown began to projectile vomit directly at the music stand, the only barrier between the children and Mrs. Rushton. I was sitting just next to Samantha. Samantha was clearly gunning for the same position I was, which is why we were both seated where we were. “They’ll never give her a part after this,” I immediately thought about my now kneecapped competition.

Mrs. Rushton acted quickly—or, as quickly as one can in this sort of situation. She sprinted at Samantha with a garbage bin, shoving it under Samantha’s chin and forcing her head into it in an effort to capture the subsequent blows. The rest of the children in the classroom were screaming, skittering in something of a butt-dragging crab walk toward the back of the room in order to get as far away from Samantha as reasonably possible.

But not I. No, I sat next to Samantha, stoically, in an effort to prove to a wholly distracted Mrs. Rushton that unlike my weak-stomached peers, I understood that the show must go on no matter the crisis.

Despite her best efforts, Mrs. Rushton couldn’t contain the pandemonium caused by the hundreds of children fully melting down and ignoring her demands for some quiet respect for an obviously distressed little girl who’d be remembered for this for decades to come. “What is the matter with you?!” Mrs. Rushton screamed at Samatha’s jeering spectators as she pulled Samantha’s hair back into a tight ponytail.

Eventually Samantha’s expulsions ceased, but the chaos from the other fourth-graders, many of whom were now running wildly through the hallways, did not.

The next morning we were again gathered for a mass scolding.

“Who here thinks they acted appropriately yesterday?” a stern Mrs. Goodrow hissed as her colleagues stood in a V formation behind her to show solidarity for their emergency vomit taskforce.

I raised my hand.

“This isn’t funny, Eli. Put your hand down.” Mrs. Goodrow shouted at me, obviously unaware that I had not joined my classmates in their retreat of unprofessional cowardice.

“Samantha is embarrassed and upset because of the way you all acted. Do you think it’s nice to laugh and scream when someone is throwing up into a mesh waste bin?”

“Ahem! We are talking with the principal later today about whether we need to cancel the Utah history field trip next week as a punishment for your behavior!”

A chorus of high-pitched “noes” flooded the room as the teachers resisted the impulse to appear satisfied that their threat had struck a chord.

The cancelation of field trips was a favorite go-to for the educators at our public academic institution. Perpetually threatened but never actually executed, they’d inform us of this possibility as a disciplinary measure for any class-wide rebellion. In this particular case, the teachers offered to deign to allow the activity to proceed, but only if we displayed an abnormal level of good behavior over the next seven days.

This we could do. This we would do. And we did, which is how we ended up spending a morning the following Thursday on guided tours of Temple Square, the State Capitol Building, and, finally, a picnic in Brigham Young’s graveyard.

It was a warm spring afternoon. The tiny cemetery was surrounded by trees as old as the city itself. Stone slabs, small and large, marked the final resting places of several prominent early Mormons and a handful of brother Brigham’s wives.

I sat next to Sam on the grass just behind a cracked and faded headstone, nibbling on my bologna sandwich, a little nauseated and too aware that we were eating just a few feet above some old dead polygamist bodies.

“We have a Slap Leather practice after school again today,” Sam told me before noticing my slumped shoulders and then quickly lying, “I wish they hadn’t picked me for this. It’s not even fun.”

Samantha Brown had been selected for the pioneer objects song, something of a consolation prize for her troubles. I’d been passed over, likely for my ill-advised decision to raise my hand in response to what I later realized was purely a rhetorical question from Mrs. Goodrow.

We sat eating in a one-sided disappointed silence for a minute or two before it hit me—something I was surprised I hadn’t thought of earlier.

“Can I borrow your black recorder?”

Fun with Andy and Bravo: A 'Real Housewives' Primer